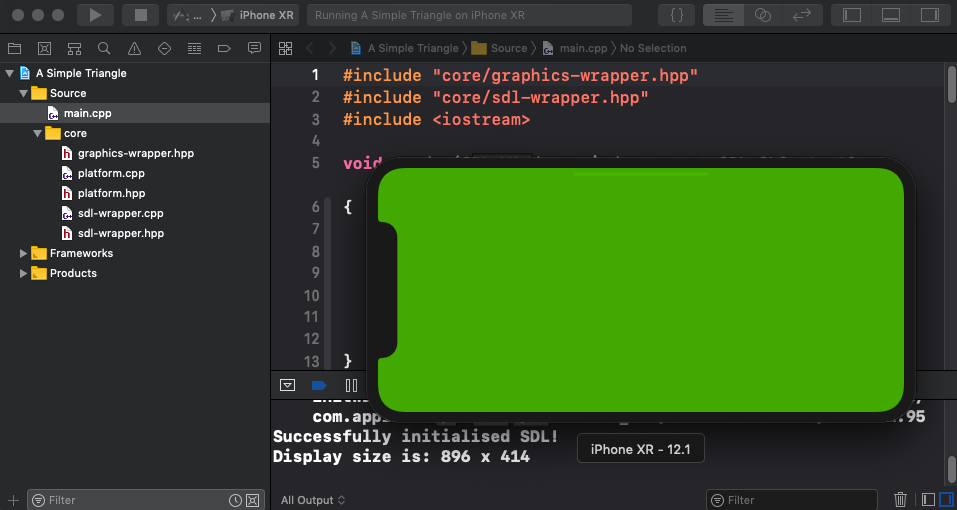 In this article we are going to add in the iOS platform target to our existing workspace. To recap where we got to in our previous article we:

The setup for an iOS application will have a few similarities to the MacOS setup. Specifically, we will be using XcodeGen again to automatically generate the iOS Xcode project - giving us the same advantages that were discussed in the MacOS setup article.

There are a couple of differences between an iOS and MacOS application that we will need to navigate:

As we explored the structure of a MacOS desktop application in the last article, let’s do the same thing for a typical iOS application.

An iOS application is just a folder containing files. If you have an .ipa file it is simply a zipped up version of your iOS .app folder. You can right click on an .app folder and choose Show Package Contents to view its contents. Here is an example of our A Simple Triangle application structure:

In the example above there are no graphic assets but that’s the general shape of an application.

We will follow the same approach as we did for the MacOS platform target, by creating an XcodeGen definition file and letting it generate our iOS Xcode project for us. The reasons for doing this were well explained in the MacOS setup article and still hold true for iOS - probably more so because there are far more iOS developers than MacOS developers.

Create a new folder named ios as a sibling to our other target folders. We also need to include an iOS launch storyboard that serves two purposes:

You can create a basic empty iOS application somewhere and copy the LaunchScreen.storyboard from it, or you can download this empty one I made and save it into the ios folder - you might need to right click the link and Save link as.

Note: the LaunchScreen.storyboard can be checked into version control as we can’t dynamically generate it - and nor would we want to.

Next create a new text file named setup.sh in the ios folder:

Mark the new setup.sh as executable via Terminal as we’ve done before for other scripts (chmod +x setup.sh) then edit it, entering the following script:

Note that we are not fetching the SDL frameworks this time.

Compiling SDL2 into a static library

For iOS, we only need the source code version of SDL2, and not the prebuilt frameworks like the MacOS and console targets did. In addition, we will be consuming SDL2 via a static library .a file, however we will need to create this static library ourselves because SDL2 doesn’t ship with it.

This process might look a little scary but basically what we need to do is this:

We will add a new method into our setup.sh named create_static_library which will build a static library if needed and copy it into the Libs folder. We are writing this as a method because we will have other use cases in the future when we want to add other SDL extension libraries into the iOS project, however our first use case is just to build the main SDL2 static library. Edit setup.sh and enter the following:

Although it seems that there is a lot going on in that script, we are just using the standard Xcode command line tools to build Xcode projects.

We will be writing another YAML definition that will be used by XcodeGen to generate our iOS project, in a very similar way to the MacOS project before. As a refresher, be sure to get familiar with the documentation for the XcodeGen tool itself: https://github.com/yonaskolb/XcodeGen/blob/master/Docs/ProjectSpec.md.

First up, we need to create our project.yml file in the root/project/ios folder:

The definition is quite similar to the one we wrote for the MacOS target, with a few subtle differences:

Note that we still add the sources and HEADER_SEARCH_PATHS the same as for the MacOS target, with the addition of the LaunchScreen.storyboard file so it is bundled up with the iOS application.

Save and close the project.yml file, then edit your setup.sh again, adding the following script to the bottom of the file:

This new script will create the symlink to the shared C++ source code, and ask XcodeGen to generate our project.

If you save and run ./setup.sh now, you should see it start to build the static libraries if it needs to, followed by the creation of our Xcode project. The output would look something similar to this:

Prior to running the setup.sh, our ios folder looked like this:

And after running setup.sh it will look like this:

With the Xcode project generated we should be able to open the iOS A Simple Triangle.xcodeproj in Xcode.

Note: The LaunchScreen.storyboard will also be shown in the Xcode project - I had captured these screenshots before I had added the storyboard to the project.yml file and I felt too lazy to recapture these screens again.

Open the Xcode project now and try to build the project - you will observe that we have a problem including the OpenGL headers:

The reason for this is that on mobile platforms such as iOS and Android, the full ‘desktop’ version of OpenGL is not available. We need to instead use the OpenGL ES (Embedded Systems) version of OpenGL. This means we’ll need to write some conditional C++ code that will include the correct headers based on which platform is being compiled.

Quit out of Xcode now and open our a-simple-triangle.workspace in Visual Studio Code. We will come back later after changing the C++ code to regenerate the Xcode project. 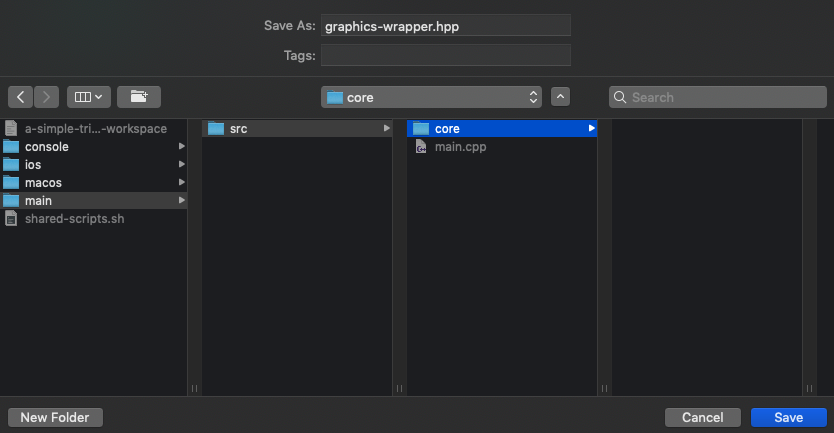 After saving the new file, navigate to the CMake panel in Visual Studio Code and press the small CMake icon next to the hammer to tell CMake to refresh its configuration and therefore pick up the new source file we added. You should then see something like this: 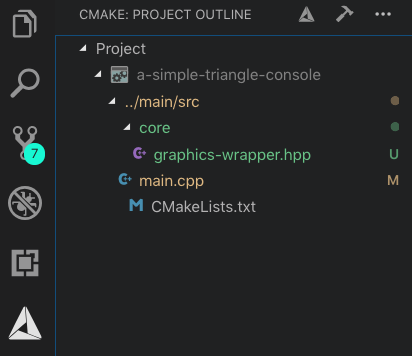 Within the graphics-wrapper.hpp file, enter the following code:

The logic behind this code is:

Save graphics-wrapper.hpp and edit the main.cpp file, changing this code:

While we are still in Visual Studio Code, run our console application with the debugger to make sure it still works.

Return back to our root/project/ios folder in Terminal and run ./setup.sh again so XcodeGen regenerates our project, therefore automatically adding the new core/graphics-wrapper.hpp source file.

Open the iOS project in Xcode again and observe that our new C++ header is included in the project now. Run the application on the iOS simulator and if everything goes according to plan it should work!. 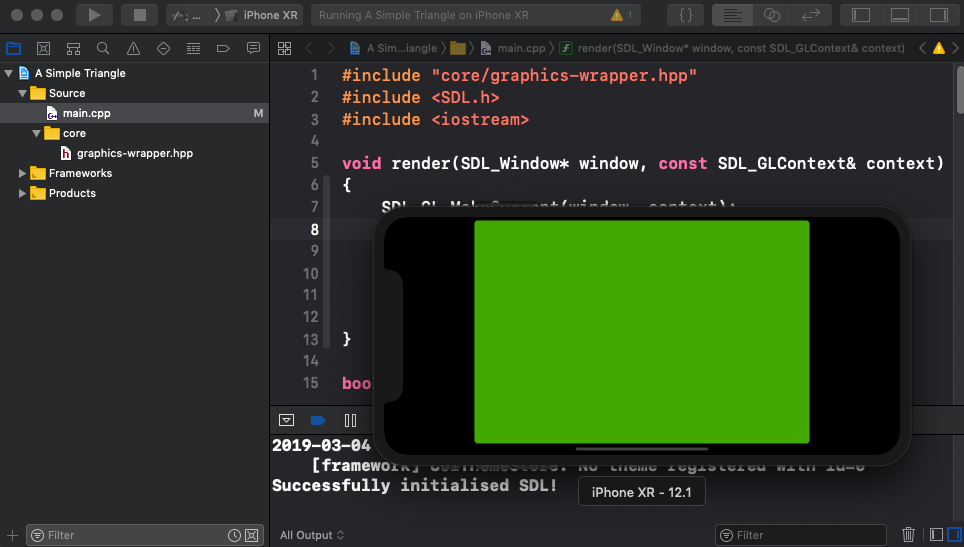 An astute observer will notice that although we can now run our iOS application, the green box which is our SDL window doesn’t appear to be filling the screen of the phone. This is because at the moment we have hard coded the window size when we create it with these dimensions:

What we really need to do is this:

We’ll solve this problem in a new C++ class that will start providing us with some core SDL functionality.

Quit Xcode and go back into Visual Studio Code then create the following new files in the main/src/core folder:

Sync CMake as we did before so the new files appear in Visual Studio Code. 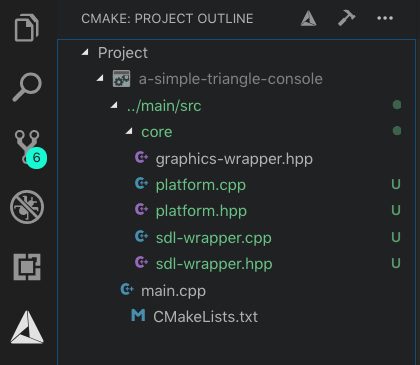 Note: As we author more C++ code, we will start to adopt some C++ programming techniques such as:

I’ll introduce a few other techniques as we need them.

There will be various points in our application where we will need to know what kind of platform we are running on at runtime. We could use preprocessor macros to #define properties to mark what platform we are running on, but I’m going to try to limit the use of macros to when I have no other choice. Instead, we will write a new enum that represents the platforms we will support, and hide the ugly #ifdef code in its implementation.

Edit the platform.hpp file and enter:

To start, we only need to represent mac (includes MacOS and Console) or ios. In future articles we’ll be adding entries for Android and Emscripten too. Notice also that we are placing this code inside the ast namespace.

We can’t really avoid the ugly #if statements but at least by putting it in the implementation we can avoid seeing it in our consuming code.

Note: This method might benefit from being declared inline but I’ll keep the code simple for now.

As we grow our code base, we will need to ask the SDL library to do many tasks for us. Our first task that we can model is the creation of a window, which will automatically detect what platform we are running on to decide what size to make the window.

Note: The SDL libraries are written in C, so we will usually need to work with raw pointers when using it, hence the SDL_Window* type.

We are declaring a couple of SDL utility functions here:

Notice also that we are using the ast::sdl namespace for this class.

The implementation of the createWindow method will:

Now that we have a shiny new wrapper for SDL, we can update our main.cpp to take advantage of it.

Change main.cpp from this:

Run the application again via Visual Studio Code and apart from a slight adjustment to the fixed window size, it should work the same as it did before.

Check what our iOS app does now

The reason we wrote the new core code was to allow the iOS platform to create its window at the correct full screen size. To test our new code, run the ./setup.sh script in root/project/ios again to pick up the new source files, then open up the iOS Xcode project and run it.

Sweet! We now have the iOS platform target running successfully and have added the ability to know at runtime which platform we are on.

If you were to commit A Simple Triangle into version control, you would want to create a new .gitignore file for the root/platform/ios folder, so it won’t include all the files that get auto generated by running XcodeGen. Here is a sample .gitignore that would achieve this for our project:

In the next article we will add the Android platform target, extending some of the C++ code further to accommodate it.