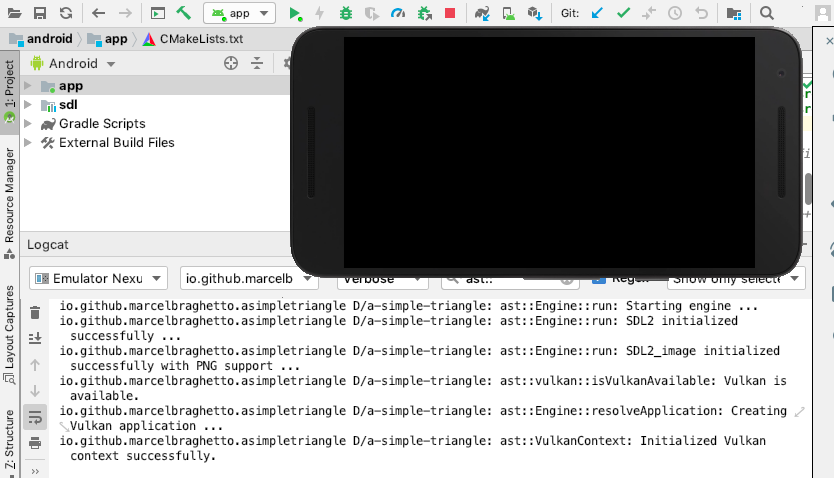 In this article we will get Vulkan running on Android. When I was researching how to do this I got stuck a number of times and went down a few rabbit holes trying to understand how to get the damn thing working the way I wanted.

One of the key differences with Android compared to MacOS and iOS is that we will use the dynamic Vulkan loader on Android - meaning that there will be no library that we link against at compile time to statically resolve the Vulkan APIs.

The benefit of using the dynamic loader approach is that we can keep our Android app backward compatible with older versions of Android which don’t have Vulkan support - basically Marshmallow (Android 6, API 23) and earlier. On older devices our engine will gracefully fall back to our OpenGL implementation which is great!

The trade off comes in the form of having to do what feels to me like a bit of hackiness to get the Vulkan SDK that is bundled in Android (at least in NDK version 20 which was the latest at the time of authoring this article) to work via the C++ vulkan.hpp header. You will see the hackiness soon, but I hope that a future NDK version resolves the need for it.

The vulkan.hpp header works splendidly for statically compiled Vulkan apps, such as the MacOS and iOS apps we have already, but if we don’t statically compile against an ICD that can resolve all the symbols that the Vulkan C++ header is looking for then we can’t compile properly.

Vulkan in the Android NDK

I’ll describe where to find the Vulkan source files we need in the Android NDK - we will need to include these files in our Android project to build against but I’ll get to that in a bit.

Browse the Android NDK in our third party folder on Mac at:

The most interesting folders and files to us under that folder are:

include/vulkan/vulkan.h: This is the core C Vulkan header file that forms the foundation of the Vulkan APIs.

include/vulkan/vulkan.hpp: This is the C++ Vulkan header file we want to use to mediate our Vulkan integration with the core APIs. The version of the C++ header file that ships with the NDK includes references to a bunch of Vulkan API functions which will cause us compilation errors without some extra work.

common/vulkan_wrapper.h/cpp: The Vulkan wrapper is a representation of the core Vulkan API functions available to us through the dynamic loader. The implementation file contains a rather cryptic collection of function pointer mappings - forming the connection to the dynamically loaded Vulkan library that we don’t know at compile time. There are inconsistencies with this wrapper and the C++ Vulkan header in the NDK which we will have to patch a fix for.

Here is an example of how the vkCreateInstance function is mapped - though pretty much all of the Vulkan functions are done like this. First off the vulkan_wrapper.h file declares an extern declaration of type PFN_vkCreateInstance and names it vkCreateInstance within the global scope.

The implementation of the Vulkan wrapper will attempt to load the libvulkan.so library on the current Android device through the invocation of the InitVulkan function - which we will have the responsibility of calling. This function will return with a fail code of 0 if the library could not load. This represents the dynamic loader behaviour and is what allows older versions of Android to still run - if the Vulkan library can’t load then we will simply bootstrap our OpenGL application instead.

If the Vulkan library was successfully loaded, the function pointer mapping is then performed like so:

The "vkCreateInstance" symbol is fetched from the libvulkan target then cast as a PFN_vkCreateInstance type, allowing it to be assigned into the global vkCreateInstance field. By doing this, application code such as in our vulkan.hpp C++ header can invoke the function using notation like this:

The ::vkCreateInstance( ... ) is invoking the vkCreateInstance function pointer in the global namespace which ultimately is resolved through our Vulkan wrapper down into the dynamically loaded Vulkan library.

Clear as mud? It’s not exactly the prettiest code I’ve seen but we have to deal with it to get Vulkan running the way we’d like.

So why am I telling you this? Well I got stuck on this for a long time because the vulkan.hpp header which ships with Android NDK 20 uses a bunch of Vulkan API functions that do not seem to be registered in the vulkan_wrapper.h/cpp even though they are bundled in the same Android NDK. The mismatch means that attempting to compile an Android application using the C++ header will be guaranteed to fail. I’m somewhat baffled why Google choose to release the NDK code in this way … perhaps many people just use the straight C based header instead of the C++ one.

Never fear though, I have a trick that will get us through this problem!

Let’s get our Android application up and running all the way to the first batch of compilation errors - exciting stuff isn’t it!?

First we need to add a compilation definition to our CMakeLists.txt file in our Android app folder to allow Vulkan to compile when 32 bit architectures are involved:

Then scroll down to the include_directories section and add two new entries to include the NDK Vulkan files we need:

Note: The ANDROID_NDK property is injected automatically into our CMake build script when the Android build tooling runs - we do not need to declare it ourselves.

We also need to add the vulkan_wrapper.cpp from the NDK as a source file to our main target so it is compiled alongside the rest of our code. Update the add_library section to include it:

Save and close the CMakeLists.txt file. We will now make a few C++ code changes to add the Vulkan integration to our Android platform.

Previously we added the Vulkan header to our MacOS and iOS platform in core/graphics-wrapper.hpp. We now need to update the Android part of that header file:

The other spot we have to update is in our bool ast::vulkan::isVulkanAvailable() function in the vulkan-common.cpp file. We need to invoke the InitVulkan() function from vulkan_wrapper.h before any subsequent Vulkan APIs are called. Doing this maps all of our Vulkan function pointers ready to be invoked by application code. Of course if the InitVulkan() function returns 0 then we should consider this to mean there is no Vulkan support on the current device.

Edit the isVulkanAvailable() implementation in vulkan-common.cpp, adding the following at the top of the function:

Fantastic - open the project in Android Studio then:

Wait a little while and your build output should start spewing compilation errors at you that look like this:

To verify our hunch, open up the vulkan_wrapper.h that ships with the NDK and try to find an extern mapping named vkBindAccelerationStructureMemoryNVX. Go on, I’ll wait. Not there is it? So our C++ Vulkan header is looking for a bunch of Vulkan API signatures that haven’t been declared anywhere in the global namespace of our project.

This is a symptom - and for Android a disadvantage - of using the C++ Vulkan header which tries to map everything it can which forces us to have awareness of SDK APIs that we may not even care about.

Another collection of errors that you can observe in vulkan_wrapper.cpp bundled in the NDK are references to Vulkan symbols that are missing - unless I’m missing something it actually feels like a bug in the NDK code:

To correct these errors we are going to add a new header file which patches in all the missing API functions and stubs out the missing symbols, but doesn’t bother implementing their mappings. Our project will just need to be careful not to use them but I believe most of them aren’t Vulkan APIs applicable to Android anyway. If you did actually want to use them, you’d need to wire them up with an implementation similar to how the rest of the APIs are done.

Create a new cpp source folder in the Android app module and add a header file named vulkan-wrapper-patch.h to it:

Now, you are most welcome to work your own way through all those tedious error messages adding extern declarations for each one until they are all resolved, OR you can copy the following code into the vulkan-wrapper-patch.h file since I already did all that tedious work for you - it should be accurate for the NDK version we are compiling against. Note the collection of typedef declarations - these will resolve the missing symbols problems in the vulkan_wrapper.cpp file. All the extern declarations provide the global mapping to the unresolved APIs that are missing from the vulkan_wrapper.h file:

Yeah can you guess how fun it was figuring this out and making that file?

To include our new header file we need to tweak our CMakeLists.txt file again, adding another include_directories entry to pick up files in our main/cpp folder:

Using our new header file is actually a bit tricky because it needs to be added as an #include header into the NDK vulkan_wrapper.h itself so it can patch away the unresolved symbols in the vulkan_wrapper.cpp file. Althought we really don’t want to have to edit the NDK source files, I couldn’t think of a cleaner way to do it. What we will need to do is change the code starting line 24 in the vulkan_wrapper.h file inside the NDK from this:

Open up android/setup.sh and at the end add the following monstrosity. Note the use of the $ANDROID_NDK path which we formulated at the start of our setup script a long time ago:

What we are doing here is this:

and replacing it with:

Note: As the shell script comment mentions, the sed command is deliberately left aligned so it can properly insert a line break without any spaces before it.

Save setup.sh then run it again, you will see output like this:

Feel free to run it again to see that once it has been patched it won’t do it again:

For our Windows based setup script add the following to the bottom of the android\setup.ps1 script to achieve a similar outcome to the MacOS setup script regarding patching the NDK header file:

Sweet - don’t you just love Android development … now go back to Android Studio and notice that the symbol errors in vulkan_wrapper.cpp are now gone and the vulkan_wrapper.h has our <vulkan-wrapper-patch.h> include directive which will clear up all those no member named '...' in the global namespace compilation errors.

Run the Android application again and if the stars align you should finally be up and running with Vulkan!

I think it was pretty neat that we are able to have Vulkan support in our Android app but keep the backward compatible OpenGLES support too in the same application.

It was unfortunate about the amount of effort and hackiness required to use the Vulkan C++ header but we got there in the end. If you coded directly against the Vulkan C header you probably wouldn’t have some of these issues but in my opinion it is definately worth the effort - when you see some of the Vulkan code we have to write later on I am glad to be able to use C++ for it.

In the next article, we’ll deal with the Emscripten platform target, which actually can’t use Vulkan.