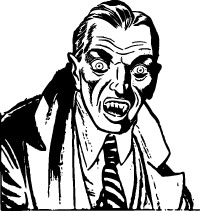 Get the source for this example here

There are myriad of ways to achieve this, but I thought I’d build on an earlier post regarding deep linking to demonstrate how to have a companion configuration app or web page which is capable of launching the main application with a given state.

Our companion launcher app will be known as Configula because it will have the ability to infect our debug application behaviour - you know - just like vampires can, however we’ll also walk through how to put a silver cross on our release builds to repel Configula…

Key goals for this demo:

The overall concept is quite similar to what I covered in my Launching apps from HTML links post.

There is some good information about having different build types in android here.

We are going to create a main application that has different behaviour in debug versus release builds.

The basics for this app is to have a simple activity that is launched and displays:

Notice in the source code snippets that I am showing what source set each source file is located. This is very important because debug and release specific source sets are not created in the main source set folders.

And the accompanying Android manifest would look like this:

If you run the app now, it doesn’t really do anything useful. You would likely see something like this:

You may have noticed that we put some TODO comments into the MainActivity class - instead of hard coding the values for the server url and analytics enabled variables, we can create a special class that is implemented differently in debug builds versus release builds.

We’ll call this class AppConfig and its job is to answer questions about how the app is currently configured.

If you attempt to compile the app you will get an error message like this:

This is Android Studio’s way of telling us to setup a signing key for our release build. I’m not going to walk through the process of doing this - there is plenty of information on the web about it.

There is however a nifty shortcut we can use for demo projects which we’ll use here - just tell our release build to use the default debug signing configuration.

Edit your app Gradle file like so to do this (other default properties omitted for brevity):

You should now be able to successfully run the release build, which will simply be signed with the default debug configuration.

Now, we are going to implement the AppConfig class specifically for the release build.

To write release specific Java, we need to create a new Java source folder that only gets compiled into release builds. There is a way to do this in the Android Studio IDE, but I find it is easy enough to do it by hand.

Open the src folder for your Android app in Terminal and enter the following command (you can also manually create the folders yourself if you like):

This should create a new Java source folder that will be compiled into release builds.

In Android Studio, perform a Gradle Sync, then you should now see something similar to this:

Fantastic, we now have a source set that will only be compiled in release builds. Note that you can do the same thing for Android resource folders, assets etc.

With the AppConfig class now created, the MainActivity can be updated to call its methods to find out what the server url and analytics enabled configurations are:

Now if you run your app in the release build variant, you will see something like this:

That’s it for the release build.

Switch back to the debug build variant.

Oh dear, it looks like our debug build now has errors in it:

And in particular the MainActivity now can’t find the AppConfig class:

This is because once you create a class in a specific build variant that is used from classes in the main source set, the same class must exist in every other build variant.

So the fix is that we need a new debug source set folder, and a debug implementation of the AppConfig class.

Open the src folder for your Android app in Terminal and enter the following command (you can also manually create the folders yourself if you like):

Back to Android Studio, you should now have a debug source set:

The debug implementation will:

With this implementation in place, you should be able to run the debug build again and see something like this:

So, the final piece of the main application is to listen for external intents that are filtered to our app so we can receive configuration requests.

The implementation is almost the same as the blog post I wrote about using intent deep links.

So, create a new class named ConfigulaActivity (you aren’t sick of the Dracula thing yet are you?):

Note: This class is never directly used by any Java code in the main source set, so we do not need to implement a release implementation of this class.

Finally, we need to register the ConfigulaActivity in the manifest with the appropriate intent filters.

We’ll take advantage of the Android build system and the way it allows for overriding resources in build variants to add a debug manifest that only contains the declaration for the ConfigulaActivity and inherits all other properties from the main manifest.

Right click on the manifests folder in Android Studio and select the option shown below:

When asked what source set to create the manifest for, select debug:

Perform a Gradle Sync and you should see a debug variant manifest:

Enter the following content into the new debug manifest:

This will allow the ConfigulaActivity to respond to external intents that match it.

That’s it for the main application!

Technically you could deep link to it without doing anything else except putting a web link on a page that is formatted like this:

When launched from the example link above, the app would display:

But we were going to make an actual companion launcher app so let’s do it!

The Configula launcher app is surprisingly easy to create. 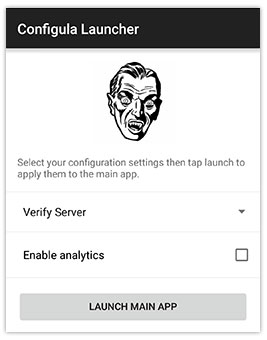 First, create a new Android application project and in the layout for the main activity place the following:

I’ll leave it up to you to come up with a stunning screen design - or you can just grab my sample code from Github.

For this example, we can define the collections of server names and urls in the strings resource:

Then basically all we have to do is check which options the user selects in the main Configula activity and construct an appropriate intent to launch the main application.

That’s pretty much it… not too painful. The important things to note are:

Try out the Configula app by selecting some options and pressing the launch button. If you are running a debug build of your main application, you should see it open with the configuration settings you selected!